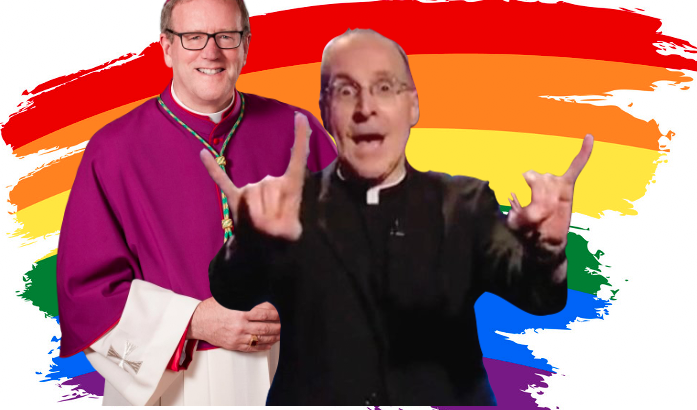 Bishop Robert Barron, an auxiliary bishop for Los Angeles and founder of the popular Word on Fire ministry, experienced a tsunami of criticism after praising pro-LGBT Fr. James Martin in an endorsement for the Jesuit’s new book about prayer.

“Delighted to share the final cover of Learning to Pray: A Guide for Everyone, to be published in Feb by Harper One Books,” said Martin in a tweet which accompanies the galley proofs for the book’s cover.

“Thanks to Bishop Barron, Cardinal B Cupich … and others for their support,” he added.

A close inspection of the back cover reveals Bishop Barron’s personal praise for the Jesuit, long known for his dedication to normalizing homosexuality and transgenderism within the Catholic Church.

“Fr. Martin is a winsome guide to all those who want to deepen their friendship with the Lord,” wrote Barron.

“Now that Barron has publicly endorsed a book on prayer by Fr. James Martin, he has absolutely no credibility for orthodox Catholics,” declared LifeSite columnist Dr. Peter Kwasniewski, an outspoken Thomistic theologian, liturgical scholar, author, and Church commentator, in a Facebook posting.

“This, friends, is a moment of God-given clarity,” continued Kwasniewski. “Barron, standing atop his media empire, brandishing a new Barronized Bible, has made the mistake of thinking he’s invincible.”

“This step clinches that he is in the charmed circle of [James] Martin, [Blase] Cupich, [Wilton] Gregory, [Theodore] McCarrick, et alia.”

“I am angry. But, more than that, I am so very sad,” wrote Fr. Richard Heilman, popular author and speaker. “It is now more clear than ever that the appeasement and compromise of our bishops to the ruling class and the purveyors of moral disintegration has been revealed to be endemic. This, while prelates do not blink an eye in castigating any holy and heroic priest who receives so much as one complaint from the Left….”

The above comes from an Oct. 31 story on LifeSiteNews.